Feeling The Love? Here's the History of Valentine's Day

Feeling The Love? Here’s the History of Valentine’s Day

As Valentine’s Day is upon us and our phone lines hop with people looking to meet their life partner, we here at Two’s Company wanted to look at the story behind Valentine’s Day. A story about love, commitment and sacrifice… a real love story.

3rd Century Rome- a brute called Emperor Claudius decided that in order to recruit men for his armies, he cancelled all marriages and engagements as many young men did not want to leave their loves behind.  Thousands of couples saw their hopes of love and marriage destroyed.

However, a simple Christian priest named Valentine came forward and stood up for love. He secretly married soldiers before they went to war. Emperor Claudius found out about the secret ceremonies and had Valentine thrown into prison and sentenced to death. 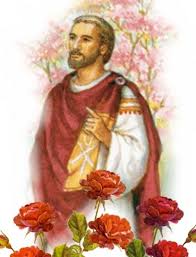 As Valentine was awaiting execution, he fell in love with a blind girl who happened to be the jailer’s daughter. On the eve of his execution, with no writing instruments available, Valentine wrote her a sonnet in ink that he squeezed from violets. The next day Valentine was clubbed to death by Roman executioners. So began the ritual of Valentine Cards.

He was granted sainthood by the Catholic Church who picked February 14 as the day of celebration.

On this Valentine’s Day, as the spirit of Saint Valentine lives on in earnest, what are you doing to find your true love?